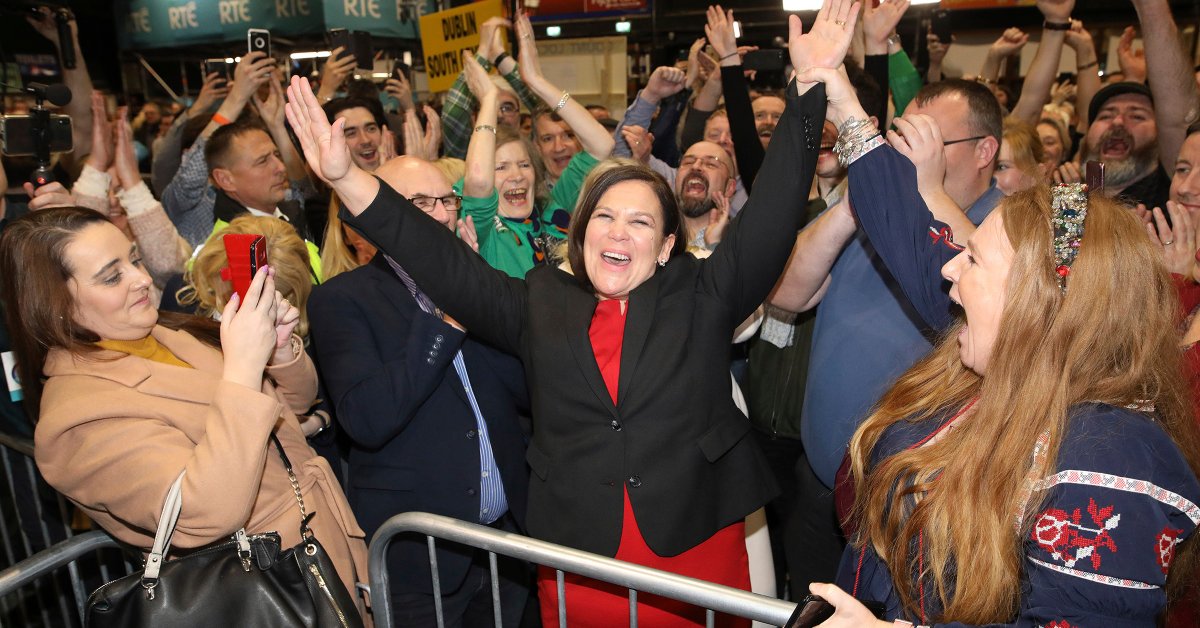 Political drama in Britain and Ireland continues… but not because of Brexit (mercifully).

Roughly a week after the UK officially left the EU, Ireland held elections that catapulted Sinn Fein from political periphery to possible king-maker as the one-time political arm of the Irish Republican Army (IRA) surprised everyone—including themselves—by receiving the most votes.

It’s hard to overstate how dramatic an outcome this is for Irish politics. For years, Sinn Fein was a political pariah because of its links to the IRA, who spent decades employing violent means attempting to oust the British from Northern Ireland (one of the United Kingdom’s four constituencies, along with England, Scotland and Wales). When the Good Friday peace agreement was signed in 1998 to end the violence, it opened the door for Sinn Fein, who were part of a power sharing agreement in the North. This week, they had their greatest success yet.

What Happened This Week:

Sinn Fein captured the most votes in national elections with 24.5 percent of the vote… and in the process smashed the duopoly (Fianna Fail and Fine Gael) that held power in the country for the last 90 years.

Just how surprising was the result? So surprising that despite Sinn Fein winning the most votes in the election, it will not actually get the most seats in parliament because it didn’t run enough candidates across the country. Instead, the parliamentary majority will go to the center-right Fianna Fail, which captured 22.2 percent of the vote. Fianna Fail has spent nearly a decade in opposition, as Irish voters have largely held them responsible for driving the country into financial ruin around the Great Recession. In third place came the (other) center-right party Fine Gael of current Prime Minister Leo Varadkar, who made an international name for himself during Brexit negotiations… but was unable to convince the Irish to reelect him and his party to power. His party was rewarded with a third-place finish and 20.9 percent of the vote. All told, Sinn Fein is likely to control 37 seats, Fianna Fail 38 seats and Fine Gael 35 in the 160-seat lower house of parliament. The Greens also delivered their best performance in Irish elections, nabbing 12 seats.

Sinn Fein hails from the far-left of the political spectrum. And in this election, it leaned into its leftist platform, promising much greater social spending across the board, limiting corporate tax exceptions, lowering the retirement age, and pausing rent hikes. Those were smart moves; according to exit polls, the most important issues for voters in elections was healthcare and housing, an issue of particular importance to younger voters (more on that below).

Negotiations—weeks of them, maybe even months. For nearly a century, the center-right parties of Fianna Fail and Fine Gael have had their way when it comes to forming governments, and both have refused to work with Sinn Fein in the past given their historic links to violence. That made sense when Sinn Fein was polling in the single digits and politically toxic, but a lot harder when they are the single-most popular party in the country. Fine Gael has ruled out working with Sinn Fein outright; Fianna Fail has been more cagey about the prospect, opting to keep its options open.

Of course, coalitions require compromise, which may well be a struggle for a Sinn Fein party that hasn’t really had much need for compromise so long as it remained on the political fringes. For their part, Sinn Fein has stated a preference for forming a government with the smaller parties, though the political math makes that difficult. If coalition talks collapse, the country heads back to elections.

It’s also possible that the two traditional power parties of Irish politics could team up to form a government between themselves, though that’s difficult for parties who have spent decades regarding one another as their respective principal rivals. And even if they could pull that off—a big if—it will cause more problems for them down the line, as Sinn Fein gets to keep its anti-establishment credentials intact while officially leading the opposition. Just look at Italy—the recent decision of the 5 Star Movement to team up with its arch-establishment rival the Partito Democratico (PD) prevented the far-right Matteo Salvini from triggering elections he would most certainly would have won, but will make him more formidable whenever Italian elections are finally held. If they’re not careful, Fianna Fail and Fine Gael will have a similar problem on their hands.

Like many other advanced democracies of late, Ireland is now forced to confront the reality that its old political system—dominated by two main parties—is finished. That has serious implications for Ireland going forward, while at the same time adding yet another data point for the continued momentum of anti-establishment politics across Western democracies.

Another reason Irish elections matter is that compared to other European countries seeing an upsurge of anti-establishment sentiment, Ireland’s economy was actually doing quite well, growing at a near 5 percent clip last year in contrast to the remaining EU average of 1.8 percent. But that wasn’t enough for current Prime Minister Leo Varadkar to secure reelection, as 63 percent of voters say they haven’t seen those economic gains hitting their own pockets. Unless headline economic growth translates to the people, it makes for a dangerous campaign message.

Irish elections also show that when it comes to voters, age matters… especially when a significant percentage of the electorate is too young to remember for themselves the historical baggage that certain political parties bring with them. 32 percent of Irish voters aged 18-34 opted for Sinn Fein; the Sinn Fein vote among over 65’s was 12.2 percent, the only age group in which it failed to secure at least 20 percent. For many Irish voters today, the IRA’s violent past has little bearing on the Sinn Fein of 2020, especially as the current party leader, Mary Lou McDonald, doesn’t have an IRA background.

Sinn Fein’s political triumph further matters as the party was against U.K. Prime Minister Boris Johnson’s Withdrawal Agreement with Brussels, and is concerned about just how much regulatory divergence there will ultimately be between the U.K. and E.U. As part of the Irish government, Sinn Fein could push for Brussels to take a harder position against London, complicating Britain’s negotiations even further.

And that’s nothing to say of the party’s long-standing desire of holding a referendum on Irish unification, something it has promised to do by 2025. There is plenty of complexity here though, as Northern Ireland would need to schedule a referendum of its own to move matters forward, which is by no means a sure bet. So not an immediate threat, but combined with Scottish National Party leader Nicola Sturgeon’s increasingly vocal demands for a Scottish independence referendum as well, the Brits may soon realize that successfully pulling the trigger on Brexit will lead to even bigger headaches down the line.

The Key Statistic That Explains It:

The One Major Misconception About It:

That Brexit was front of mind in these elections, especially given all the drama surrounding the “Irish backstop” and the disproportionate hit Ireland stands to take from a possible economic slowdown in the neighboring UK. It wasn’t—according to exit polls, just 1 percent of voters said Brexit was a “priority” for them when it came to pulling the electoral lever. Which means…

The One Thing to Say About It at a Dinner Party:

Irish elections this weekend is proof that Brexit is a whole lot more important to the U.K. than it is the rest of Europe. At the end of the day people vote for national leaders who support their own personal interests. There’s a lesson there for both E.U. leaders on the domestic front, as well as for the British government that seems committed to taking a hard negotiation line with Brussels.