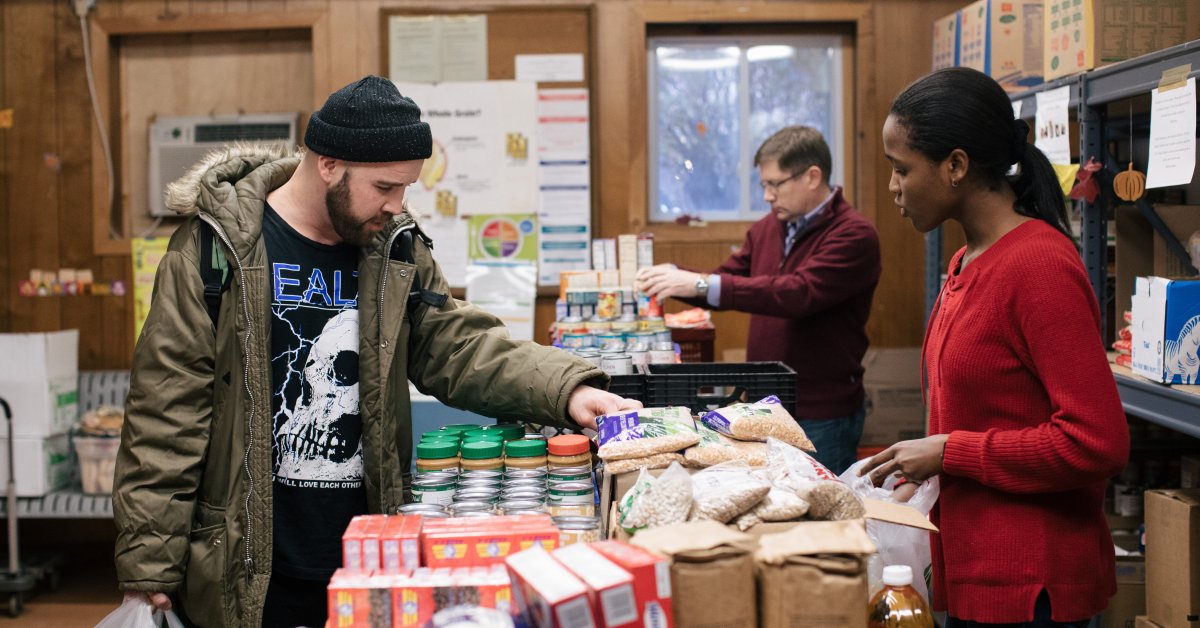 Kate Maehr’s job is about to get a lot harder. Maehr runs a food bank that’s part of a network distributing nearly 200,000 meals around Chicago every day. But last year, official unemployment figures for Cook County, where Chicago is located, improved. As a result, some 50,000 residents are at risk of losing their benefits from the federal Supplemental Nutrition Assistance Program (SNAP), better known as food stamps.

With so many people getting less help from the government, Maehr knows they will turn to her charity for help. What she doesn’t know is if she’ll be able to feed them. “We don’t have the ability to all of a sudden replace all of those meals that people will lose,” says Maehr, executive director and CEO of the Greater Chicago Food Depository. “I guess in my heart of hearts, the thing that keeps me up at night is that I think people will starve.”

This is not just Chicago’s problem. While Cook County just lost its benefits under existing guidelines, the U.S. Department of Agriculture, which administers SNAP, recently finalized a rule that will make it harder for all states to make concessions for able-bodied adult SNAP beneficiaries in struggling areas going forward. Nearly 700,000 people across the country could lose their food stamps once the new rule kicks in in April, according to USDA’s own estimates.

The tightening of the food stamp program is part of a broader effort by the Trump administration to reduce government spending on social safety net programs. “We need to encourage people by giving them a helping hand, but not allowing it to become an infinitely giving hand,” Secretary of Agriculture Sonny Perdue said in a press release announcing the rule change in December. “In the midst of the strongest economy in a generation, we need everyone who can work, to work.”

In its 2021 budget proposal announced Monday, the Trump Administration doubled down on trying to slash SNAP spending by proposing to convert part of the program’s monthly funds to “Harvest Boxes” — deliveries of American-made shelf-stable foods like canned goods, rice and pasta — and to extend work requirements to adults up to the age of 65, instead of 49. The Administration estimates its recommendations would save $182 billion over the next ten years.

Critics say the cuts are putting people at risk.”While many of the president’s proposals will not be considered by Congress, his stances on low-income communities, families and children reflect a disturbing theme of leaving America’s most vulnerable behind,” FoodCorps, a nonprofit that helps connect kids to healthy food in school, said in a statement on Tuesday.

Over the last half century, millions of Americans have benefited from the federal food stamp program, which was first signed into law by President Lyndon Johnson in 1964. But since 1996, the program has limited most able-bodied, childless adults between 18 and 49 to three months of food stamps within a three-year period, unless they work or are in a work-training program for at least 20-hours per week. And for places struck hard by joblessness, there’s been a workaround. States can grant waivers to people in areas with high-unemployment, effectively eliminating those work requirements. Over the last 22 years, every state except Delaware has used these waivers to help residents get access to food.

As of April, states seeking those waivers will have to prove unemployment rates in the areas they are seeking the waivers for are at least 20% above the national average, and at least 6% in general. The rule also changes the type of data states can use to justify waiver requests: States will now have less authority to combine areas to reach the necessary unemployment rates to obtain waivers for those areas.

In addition to the 700,000 able-bodied adults that the USDA estimates will be impacted by this change, advocates like Maehr worry there will be a trickle-down effect that will also impact more vulnerable groups, like people with disabilities and children.

Miranda Fenske, a 35-year-old Oswego County, New York resident with severe hearing loss and glaucoma in both eyes, is one of the people who could lose her SNAP benefits. Though Fenske has disabilities, she does not receive disability payments through Social Security and therefore does not qualify for a personal exemption from the SNAP work requirements. She’d like to work in retail, she says, but has had a hard time finding even part-time work. “My hearing loss is pretty bad, nobody wants to hire me,” she said, having requested to communicate via text message due to her hearing impediment. “It’s not fair… what’s about to happen with SNAP. There are way too many people like myself that have disabilities, but are still able to work, but can’t find work.”

Children will also suffer as a result of the new policy, its critics say. Though adults with dependents don’t have to be working to receive food stamps, parents often provide other types of support for their children even if they don’t live with them or claim them as dependents, Maehr points out. “They may not live in the household, but they might provide critical support and resources. If they all of a sudden lose their SNAP benefits, and now there are fewer resources, that will impact children,” she says. “Make no mistake, it will affect children. It will affect people with disabilities, it will affect older adults.”

Many Americans agree with the Trump Administration’s underlying argument that food stamp and other social safety net beneficiaries should have jobs. According to a 2017 survey conducted by the conservative Heritage Foundation, 92 percent of respondents said able-bodied adults who receive cash, food, housing, and medical assistance should be required to work or prepare for work.

Whether tying social benefits to work requirements is actually effective in pushing people into the workforce is an open question. A recent Georgetown Law study suggested it doesn’t. “Work requirements do not lead to more work,” a fact-sheet of the project’s takeaways says. “Instead, they lead to more people losing coverage or benefits and will deepen or increase poverty.”

In the United Kingdom, researchers also found that harsh restrictions on welfare benefits had negative social effects, leading vulnerable populations to withdraw from benefits programs altogether, “in some cases triggering a move into survival crime.”

“There’s certainly no strong evidence base that harsh conditionality regimes will help move people into work and keep them in work,” says Suzanne Fitzpatrick, one of the lead investigators of the Economic and Social Research Council’s Welfare Conditionality Project. “There is certainly an impact on how many people claim benefits, but that’s not at all the same as saying you’ve moved people into work. Often, what you’ve done is just make them destitute, or dependent on other, more problematic ways of getting by.”

Maehr, the leader of the Chicago Food Depository, doesn’t have much time to think about those potential outcomes. She’s too busy coordinating with her organization’s partners about what the elimination of Cook County’s waiver will mean over the next few months, and figuring out which food pantries she will need to direct the most food to when SNAP recipients’ funds dry up.

“Now we’re going to see more people needing us more frequently,” she tells me. “I don’t know how we do it.”