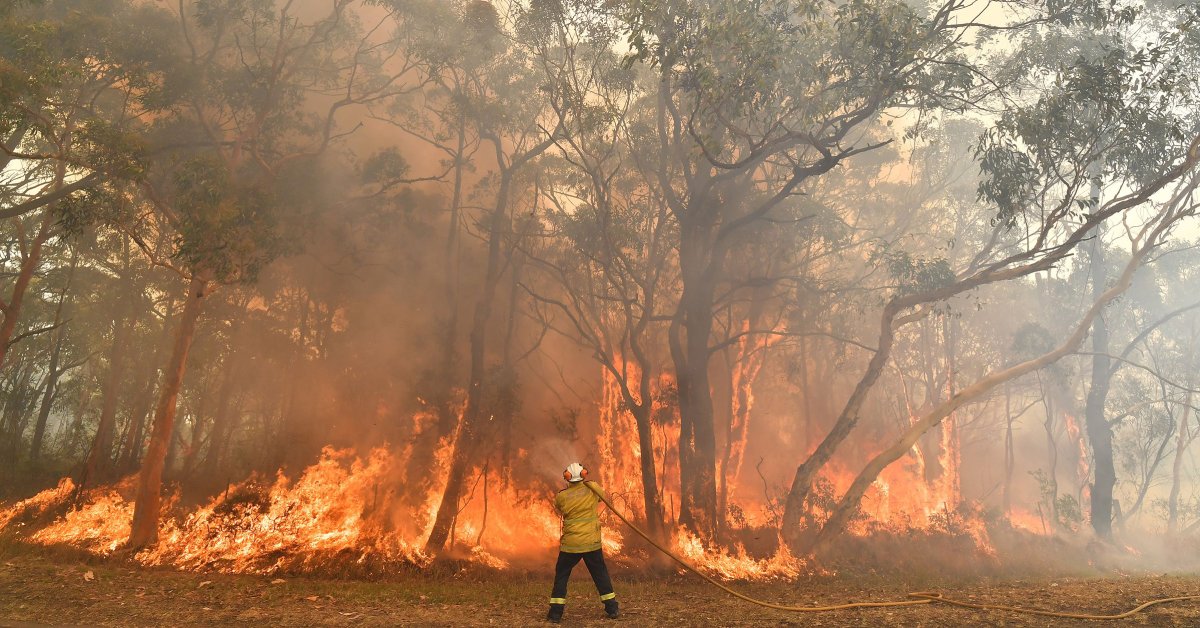 Australia has always had bushfires, the result of being the driest inhabited continent on earth combined with high temperatures. Its indigenous people, who predate European colonization by some 40,000 years, learned to manage and mitigate fire risk through specific knowledge of local ecosystems and carefully controlled burnings. As Australia suffers through drought, heatwaves and devastating bushfires this summer, practitioners of indigenous fire management report greater interest in their work than ever before.

Australia was colonized by the British in 1788, with settlers systematically working to decimate the existing indigenous population through violence. Those who survived found themselves herded onto Christian mission compounds and forced to adopt a more Western lifestyle, with the result being the loss of traditional knowledge systems, based on many thousands of generations of observing nature. The recent surge in interest in indigenous fire management is an implicit sign that many Australians recognize the value of what was very nearly lost.

“This fire has really shaken the country up,” says Victor Steffensen, an indigenous cultural burning expert who has been working to share his knowledge for more than 20 years. “It’s the biggest fire that has happened in most peoples’ lives. People want to see better management of the landscape.”

Cultural fire management involves lighting fires that are good for the land under controlled conditions to lower the risk of future hazards. For example, the leaves, old grass and branches that litter the ground in bushland areas may be burned in a controlled manner to reduce their potential to act as fuel for an uncontrolled fire later on.

Western fire practices also involve hazard reduction burns, which are similarly aimed at burning out this litter. What is different, though, about cultural burning, is that it starts from taking a holistic approach with the understanding that everything is interconnected: plants, animals, insects, humans, the weather. Westerners call it an ecosystem, indigenous Australians term it “kinship,” an acknowledgement that the bonds between species are emotional, in addition to functional. Western hazard burns are indiscriminate, while cultural burns are specific: timed to coordinate with the seasons, animal breeding times plant seeding times.

Practitioners typically light small and controlled fires with a specific purpose, such as to clear out an invasive species that isn’t meant to be in that particular area, or to encourage regeneration of ground cover of native diversity. Key to the practice is a deep knowledge and understanding of the immediate landscape: its vegetation, native animal species, topography and climate. Traditional burning aims to burn at the right times and in the right manner to encourage the native vegetation in each micro-region to grow, which ultimately prove far less flammable during bushfires than invasive species.

Steffensen says his greatest fear is that the government will simply ramp up hazard burns—something he believes is unsuitable if applied carelessly to the landscape. Applying the wrong type of fire can encourage the wrong vegetation to grow back, which can in turn create the conditions for more devastating bushfires down the track.

Steffensen learned about cultural fire management from indigenous elders of the Kuku Thaypan clan in Australia’s most northern tip of Cape York. Fire workshops incorporating a number of Aboriginal communities were established, which led to the setting up of the organisation Firesticks Alliance. Based in northern New South Wales, Firesticks hosts workshops to spread practical knowledge of cultural burning. Now there is a growing network across many parts of Australia with workshops involving local indigenous clans and parks and wildlife workers.

As the fires keep burning, Steffensen says there has been a noticeable upswing in interest from all quarters. “The general public, landowners, rural fire services from around the country, local government officials, town councils, even schools have been in contact, wanting to either book a workshop or figure out ways of collaborating,” he says.

Steffensen imagines this interest could be an opportunity on many fronts: “I see this resulting in greater community leadership and revival of indigenous knowledge,” he says. “It also gives indigenous people the chance to get employment that is meaningful and culturally based.” He says there needs to be the development of a fire management system that blends indigenous and Western practice.

Under Australia’s federal political system, fire management is the responsibility of each state and territory.) Some local fire services have started incorporating elements of indigenous practice, albeit in a limited way. The New South Wales Rural Fire Service, for example, works closely with indigenous communities across the state to conduct cultural burnings on private or government land, and also facilitates training sessions through Firesticks for firefighters. “It’s a hazard reduction tool that can reduce the severity of fires,” says spokesman Anthony Bradstreet.

A key element of cultural burning is awareness of the seasons—but not the ones of the Western calendar. Colonization meant the imposition of the Gregorian calendar and four seasons which begin and end on stipulated dates. However, summer, fall, winter and spring, based on the climate of northern Europe, are wholly inadequate to categorize Australia’s richly diverse seasons, according to PhD candidate and ecologist Michelle McKemey.

With most of the knowledge of the seasons being orally handed down, she has worked with a number of indigenous communities to develop geographically appropriate seasonal calendars as part of her research in cultural burning. “There is so much diversity across Australia, even down to the number of seasons,” she says. McKemey used to work in Kakadu National Park, in the Northern Territory; there, she says, “one end of the park had six seasons, while the other end had seven.”

The calendars include information about biocultural indicators: events in the natural world that indicate the change of a season, which is linked to fire management. For example, the start of winter in her local area in northern New South Wales is indicated by male lyrebirds singing. Another indicator comes in late winter when echidnas — a native Australian mammal similar to a hedgehog — form breeding trains: the female in front, with two or three, even as many as six males waddling behind her, hoping for a chance to breed.

McKemey is optimistic that ancient knowledge will find new favor. She cites the example of the Yugul Mangi Rangers, a group of indigenous land-management experts who are involved in a widely-respected carbon abatement program in northern Australia. The Rangers conduct early-season savanna burning practices to mitigate fires later on. “They’re world leaders when it comes to burning for carbon credits and in best practices of fire management,” says McKemey. “Their traditional ecological knowledge is highly respected, and [getting that respect] has really empowered them to restore their traditional burning practices.”

“If we could see this happening in southern Australia too, that would be a sign of true progress.”