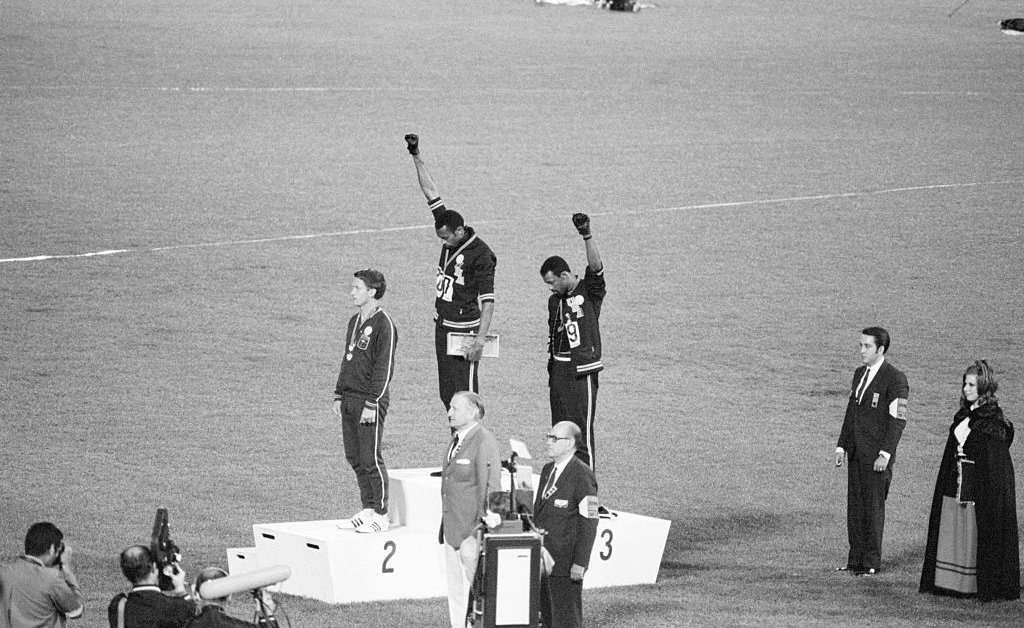 The Olympics “are not and must never be a platform to advance political or any other divisive ends,” said IOC President Thomas Bach. “Our political neutrality is undermined whenever organizations or individuals attempt to use the Olympic Games as a stage for their own agendas, as legitimate as they may be.”

While Rule 50 of the Olympic Charter already prohibited athletes from protesting at the Games, it did not give much clarity on what counts as “protest.” The new guidelines specify examples, including displaying political messaging in signs or armbands, kneeling, disrupting medal ceremonies or making political hand gestures.

The IOC announcement comes at a time when activism among athletes has surged amid rising political tensions, particularly in the United States. Last August, the U.S. Olympic and Paralympic Committee placed hammer thrower Gwen Berry and fencer Race Imboden on a year-long probation after kneeling during a medal ceremony at the Pan American Games in Lima Peru.

Several athletes have spoken out against the new guidelines, including soccer player Megan Rapinoe who wrote in an Instagram story: “so much being done about the protests. So little being done about what we are protesting about. We will not be silenced.”

Though the IOC is advocating for political neutrality, the Olympics have been a stage for political protests since the Games began in 1894. Here is a brief look at the history of protests.

At the 1906 Olympic Games in Athens, Irish track and field athlete Peter O’Connor carried out one of the first and most famous acts of political protest in Olympic history.

In 1906, O’Connor entered the games to represent Ireland. New rules implemented later that year, however, only allowed athletes nominated by an Olympic Committee to compete. Because Ireland did not have a committee at the time, the British Olympic Council claimed O’Connor as their own. When O’Connor, a proud Irishman, found out he would be competing for Great Britain, he was outraged. In 1906, the battle for Irish independence was in full swing and demands for constitutional change to allow for self-governance were growing.

In protest, O’Connor scaled a 20 foot flagpole in the stadium, waving a green flag with the words “Erin Go Bragh” (Ireland forever) while his co-athlete Con Leahy distracted Greek authorities.

While Olympic officials frowned upon O’Connor’s protest, he was never expelled or put on probation. He competed two days later and won gold in three competitions. After each win, O’Connor waved his green flag.

1968: John Carlos and Tommie Smith raise their fists in the Black Power salute

When American runners John Carlos and Tommie Smith stood on the medal podium to receive their respective bronze and gold medals at the Mexico City Olympics in 1968, they famously raised their fists in a Black Power salute when the American national anthem began playing. Their Australian co-medalist Peter Norman stood in solidarity with them, wearing an Olympic Project for Human Rights badge during the ceremony.

Racial tensions in the United States at the time were high. Martin Luther King Jr. had been assassinated a few months earlier and protests against the Vietnam War were gaining traction.

The act of protest ruined the three athletes’ careers. Millions of Americans were outraged by the act. Carlos and Smith were kicked out of the Olympic village, suspended from the U.S. team and sent home. Norman was also snubbed by the Australian Olympics team in 1972, despite qualifying.

Despite the consequences for their career, Carlos and Smith do not regret their actions. “I’m proud of what we did,” Carlos told the New York Times in 2016.

“They never let us forget that we were wrong,” Smith added. “We were not wrong. We were only ahead of our time.”

1968: Věra Čáslavská turns her head away from Soviet flag during medal ceremony

Carlos and Smith weren’t the only athletes to protest at the Mexico City Olympics. Věra Čáslavská, a Czechslovak gymnast, took a stance against the Soviet regime.

Two months before the Games, the Soviets had invaded Czechoslovakia. Čáslavská, who had spoken out against Soviet rule, was forced to flee to a forest hideout, interrupting her training schedule. Rather than practicing in a state of the art gymnasium, she trained on homemade gymnastic apparatuses.

Despite her challenges getting to the Olympics, Čáslavská won four gold and two silver medals in Mexico. During a medal ceremony, Čáslavská turned her head away from the Soviet flag in protest.

While the act was subtle, the repercussions were harsh. Čáslavská retired after the Games but was prohibited from living a normal life for the next two decades. She worked as a cleaner and was barred from coaching. Čáslavská was only welcomed back into the gymnastic world after Communism fell.

In 1980, President Jimmy Carter announced that the United States would boycott the Olympic Games in Moscow after the Soviet Union failed to withdraw its troops from Afghanistan. The Soviets invaded Afghanistan in 1979 to prop up communism in the region.

Canada, West Germany and Japan joined the United States in its boycott of the Olympic Games. Carter threatened to rescind the passports of any American that tried to compete under a neutral Olympic banner.

The Soviet Union struck back by boycotting the 1984 Olympics in Los Angeles.

At the 2004 Olympics in Athens, the then Iranian world champion Miresemaeili refused to fight Israeli judoka Ehud Vaks.

“Although I have trained for months and was in good shape, I refused to fight my Israeli opponent to sympathize with the suffering of the people of Palestine and I do not feel upset at all,” Miresmaeili told the news agency IRNA.

Since the Islamic Revolution in 1979, Iran has refused to recognize Israel and has praised athletes who boycott competitions with Israelis.

Last October, Iran was banned from international judo competitions for pressuring Iranian fighters to refuse to fight Israeli athletes. The ban followed an incident at the 2019 World Championship in Tokyo where Iranian authorities allegedly pressured Iranian judoka Saeid Mollaei to withdraw from matches against an Israeli judoka, which the Iran Judo Foundation has denied. The ban will prevent Iranian judokas, many of whom were considered medal-contenders, from competing at the 2020 Olympics in Tokyo.