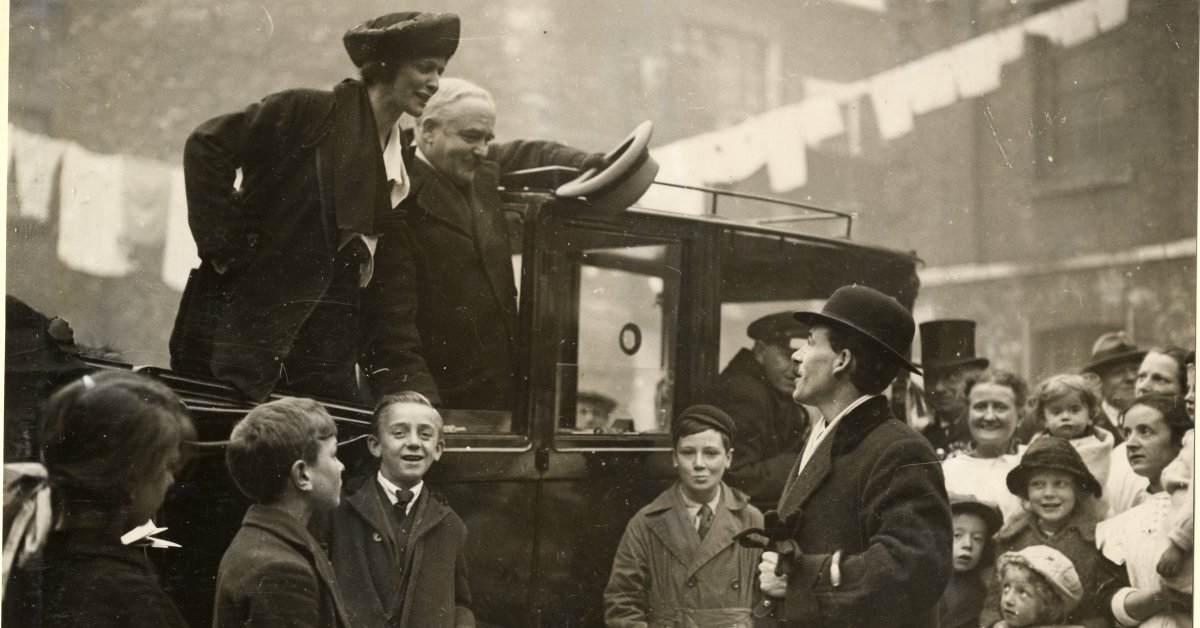 A century ago, Nancy Astor made the train journey from her constituency in Plymouth, a city on the coast of southwest England, to London. There, on Dec. 1, 1919, she took her seat in Parliament — the first woman in British history to do so.

When she was elected as a Conservative Member of Parliament (MP) in the U.K. in 1919, women, and only some women (those over the age of 30 who met a property qualification) had been entitled to vote for just over a year. Astor was not the first first woman to be elected to Parliament — in 1918, Constance Markievicz won an election in Dublin, Ireland, but she abstained from taking her seat due to her political party Sinn Féin’s policy. This meant Astor was the first woman to break that barrier. In doing so, she defied centuries of sexism entrenched in British society and, with her debut in Parliament, entered a then-totally male dominated world.

In many respects, Astor’s legacy is a complex one. She was later re-elected seven times before retiring in 1945, having lost the support of her party. Historians and biographers have pointed out that her views in the 1930s included reported sympathies with Nazism and fascist movements; she is also reported to have made anti-Semitic and anti-Catholic statements.

24 female MPs were elected in the 1945 general election and Astor was succeeded in Plymouth by Lucy Middleton, a politician from the Labour party.

Although her political life played out during an entirely different era, historians and modern-day lawmakers there are several parallels between Astor’s experiences and those of female politicians in the U.K. today.

Astor ran for her husband’s seat in the House of Commons when he was given the title of Viscount and later elevated to the House of Lords. Astor, who was born Nancy Witcher Langhorne in Danville, Va., to a family that lost their fortune during the American Civil War, stood out among the politicians of the day in more ways than one. A 26-year-old Nancy had moved to England in 1905 and crossed paths with fellow American expatriate Waldorf Astor; the pair married a year later.

“When she arrived in England, she was not the typical English woman. She was American for one,” Astor’s grandson, Viscount William Astor tells TIME. “I think one of the reasons why she became an MP was because she was entirely oblivious to the barriers that blocked women in England.” (The first woman elected to Congress came only three years earlier.)

Jacqui Turner, a history professor at the University of Reading, agrees. “Nancy ran an amazing, lively, witty American-style campaign,” Turner says. “She didn’t have that English upper class stiffness [or] formality about her.” Instead, Astor would meet local people in Plymouth’s poorest areas, sitting down with women in poverty and advocating for policies that would benefit them. Astor gained a wide following among the city’s women, Turner notes, who in turn convinced their husbands to vote for her.

“That was really groundbreaking at the time,” says Charlotte Holloway, a candidate for the Labour Party running to represent the constituency of Plymouth Moor View — which was encompassed by Astor’s original seat until 2010 — in the December 12 U.K. general election. (Currently Labour MP Luke Pollard, Plymouth’s first openly gay MP, holds the seat of Plymouth, Sutton and Devonport; Conservative MP Johnny Mercer holds Plymouth Moor View.) “When we see that the [Conservative] government’s austerity agenda has disproportionately impacted women, and we see that children are living in poverty in the 21st century, her legacy is as alive now as it ever was.”

Astor continued to advocate for local politics, controversially opposing the conventional Conservative Party line and campaigning for temperance by highlighting the damage alcohol was doing to the Plymouth’s communities. “I look at good MPs today and that’s what they do,” says Rebecca Smith, a Conservative parliamentary candidate running in Astor’s former seat in Plymouth Sutton and Devonport. “They are on the ground finding out what’s going on and aiming to influence laws to bring change in their local community.” Astor introduced the Intoxicating Liquor Bill in 1923, the first Bill by a woman to be passed into a law in the UK. The law states that it is illegal to drink alcohol under the age of 18 and still stands today.

As a politician, the quick-witted Astor was a “maverick,” her grandson says. “You never knew quite what she was going to say or do.” For two years, until the second woman to be elected entered the House, Astor had to fight to be heard. “She battled away, determined. She would stand up and interrupt people occasionally or make a tough speech so that she would be heard. You look back at some of her speeches now and you think, ‘Why did she say that?’” says William Astor. “Then you realize when you read the whole debate, she’s just saying ‘I’m here too. You’ve just had an entire debate on women’s rights and I’m the only woman in the room but nobody has asked me to speak.’”

For years, several politicians refused to speak to Astor on account of her gender. But over time, she broke down those barriers, and ended up gaining friends and support from across the political spectrum. Her following was widespread; every week, she would receive around 3,000 letters from women across the country, according to Turner.

But the letters Astor received were not always positive. According to historian Turner, one unsigned note read “To that blasted American whore, go home.” For many female politicians, there are clear parallels today. Several female MPs have stood down ahead of the upcoming election citing abuse, including rape and death threats. While Astor received letters, female politicians now receive abusive comments on social media.

A study last year by Amnesty International found that Labour politician Diane Abbott received almost half of all abusive tweets sent to female MPs in the run-up to the last general election in 2017. “As a woman standing, it does make me quite scared and anxious,,” says Sima Davarian, a candidate running to represent the Liberal Democrats in South West Devon. “There’s definitely misogyny and nasty rhetoric.” Davarian says there are also other challenges women still face when trying to enter into politics; proxy voting for MPs on parental leave was introduced on a pilot scheme only in January this year.

Astor also faced backlash from her peers, including Prime Minister Winston Churchill, who was not in favor of women entering Parliament. (In his younger years, Churchill was opposed to the campaign for female suffrage.) When Astor had taken her seat in Parliament, Churchill reportedly said he felt as if “a woman had come into my bathroom and I had only a sponge to defend myself with,” William Astor notes.

Famously, the pair sparred during Parliamentary debates. “Churchill would make rather long speeches and my grandmother would get bored, so [on one occasion] she stood up and said: ‘If I was married to you, I’d poison your coffee’, to which Churchill replied, ‘If I was married to you I’d drink it,’” says William Astor. In a 1964 article, TIME wrote Astor “was criticized, denounced and derided during much of her life.”

“Her legacy for me was that she stuck it out,” says Turner of Astor’s role in Parliamentary history. “She didn’t give in, she didn’t not turn up, she worked harder than anyone else and she spoke out.”

And things look different today, with the most recent Parliament included 211 sitting female MPs — although while the proportion of women is at an all-time high since records began, it still stands at just 32% representation. Smith says that she’s part of a WhatsApp group with other female politicians to share support and advice; a big difference to when Astor stood alone in Parliament. “There’s a culture that it’s normal to have women in the House of Commons now, showing how society has moved on,” Smith says.

A century later, the female candidates running in Astor’s constituency and the surrounding areas still see her impact, and parallels with her experiences. “Although the circumstances in which she was elected are different than what a lot of us find now, ultimately she opened the door for women MPs to come through, and she held that door open,” says Smith.